In today’s world running type shoes in strange but colorful combinations seem to have caught the eye of far too many men. One of the earliest examples to be seen may have been Darren McGavin back in 1974. He typically wore a suit, a dippy hat, and sneakers. However that may be, really proper dress shoes, and even better, boots, have often had to take a back seat to poor taste.

Whatever the occasion, whoever the man, a pair of boots is normally proper and not only looks good but these boots feel good on the feet. A man wearing boots simply feels he has a firmer grip on his environment.

A gentleman wears leather shoes. Cap toes and wingtips have always been highly favored along with plain toes to follow. But when we move these styles up to a low boot, we are stepping into a new, dressier realm where only those with a real understanding of footwear will be found.

Throughout the years boots have remained a choice, although they have become harder to find. And finding the right boots, while not always easy, is to find the footwear a man should have had on his feet many years ago. 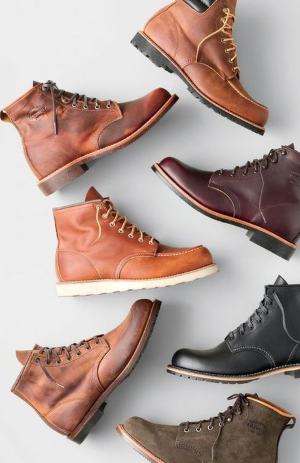 Of course, the Beatles and stars like Michael Caine made what is known as Chelsea boots quite popular in the 1960s, although they had already been seen marching about in the UK long before that.

A comfortable low boot with elastic sides that make it easy to slip into or to slip off without the aid of a cowboy boot jack, they don’t require lacing and unlacing and have an elegantly casual look about them that makes them great for almost any occasion and go with tailored slacks or a grungy pair of jeans.

Moving up from the Chelsea to an ankle boot one finds a greater variety and since most have a vertical zipper on the inside, getting them off and on usually presents no difficulty. (Even in old Westerns, many of our childhood cowboy stars wore full-length cowboy boots with a vertical zipper which hadn’t even been invented at the presumed time of the action, but that’s Hollywood!)

Zip ankle boots may be found in a great many styles, from work-type boots up to very dressy models. Many come in lace-up models as well and can have a deceptively work boot look while costing closer to $1000 a pair. Hardly the price one pays to carry mail.

The king, however, of ankle boots remains the eternally attractive and dressy wingtip. Aside from the most formal occasions where perhaps a patent leather slipper is appropriate with a tux, the wingtip is the one shoe that tells others you know how to dress and to dress right. Its elegance paired with its enduring beauty and quality detailing makes the wingtip shoe a perennial favorite for those who dress for success.

A variation on this is a cap-toe look, sometimes referred to as the Trench Boot that harks back to the officers’ boots worn during World War I. A plain toe is also available, as are sometimes other patterns.

Returning to a more casual look, the desert boot, aka Chukka, was worn originally by British soldiers back in World War II. Because of their ability to hold up in the rough desert field of operation as well as not showing the scuffing smooth leather boots would have undergone very quickly, made these “rough-out” (a suede look) boots the ideal boot to wear.

After the war ended, the boots found their way to America where the style quickly caught the imagination of the American public and over the years has remained an ever-popular choice. The original, made by Clarks of England, has now become available from other companies, some very expensive indeed.

For the great outdoors, boots have always been the first choice. And there is a boot for every occasion. There are hiking boots, intended for days wandering about in sometimes rough terrain, fording creeks and other demands that just would work with a pair of sneakers.

There are boots designed for mountain climbing and others for hunting.

In conclusion, men all over the country can, and should, find at least one pair of boots that is right for them. A wardrobe without boots lacks the cachet it should have and that man is really missing out on an important article of clothing.